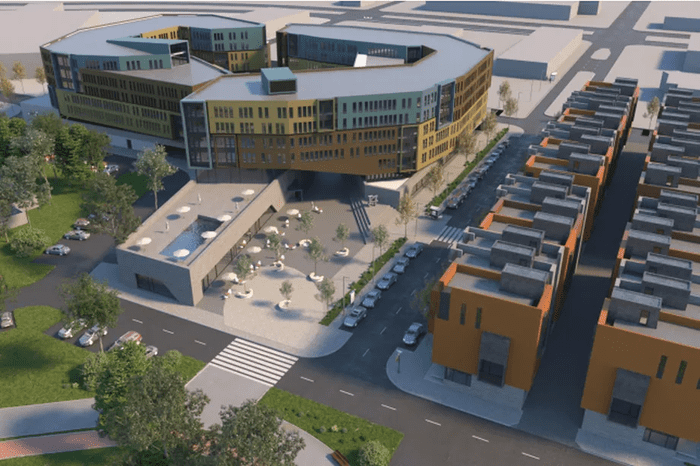 This article was originally posted on Philly.Curbed.com

A year after proposing a development with over 200 townhomes along the Delaware River, Philly-based group U.S. Construction has substantially tweaked their plan.

Now, the focus is on fewer townhomes, more apartments, and a closer connection to a nearby walking trail.

The new proposal for the space at 1401 South Columbus Boulevard, was released online this week ahead of a Civic Design Review (CDR) meeting on April 2.

Dubbed “Waterfront Boulevard,” it calls for 92 townhomes on the north end of the property, with a mixed-use building on the south end. The building will include 330 multi-family units, 20,000 square feet of commercial space, and both garage and surface-level parking. The project also plans to move an originally planned riverfront plaza, back from the water a few feet, allowing the Delaware River Trail to pass between the development and the waterfront, uninterrupted. It’s all a big change from the last time the group took their plans for the property in front of the CDR in early 2018. The original idea included no mixed-use building. Instead, it consisted entirely of townhomes—214 total—along with a community center and a cafe. It also cut into the Delaware River Trail.

While the original proposal called for 367 parking spaces, the new one has almost 564.

The eight-acre parcel was previously owned by Bart Blatstein, who originally owned 16 acres.

It’s just the latest news in a long series of projects that are in the planning or construction process along the Delaware River Waterfront, many of them on the northern end of Market Street.

In anticipation of Tuesday’s CDR meeting, you can check out some renderings of the project, which is being designed by Atrium Design Group, below.