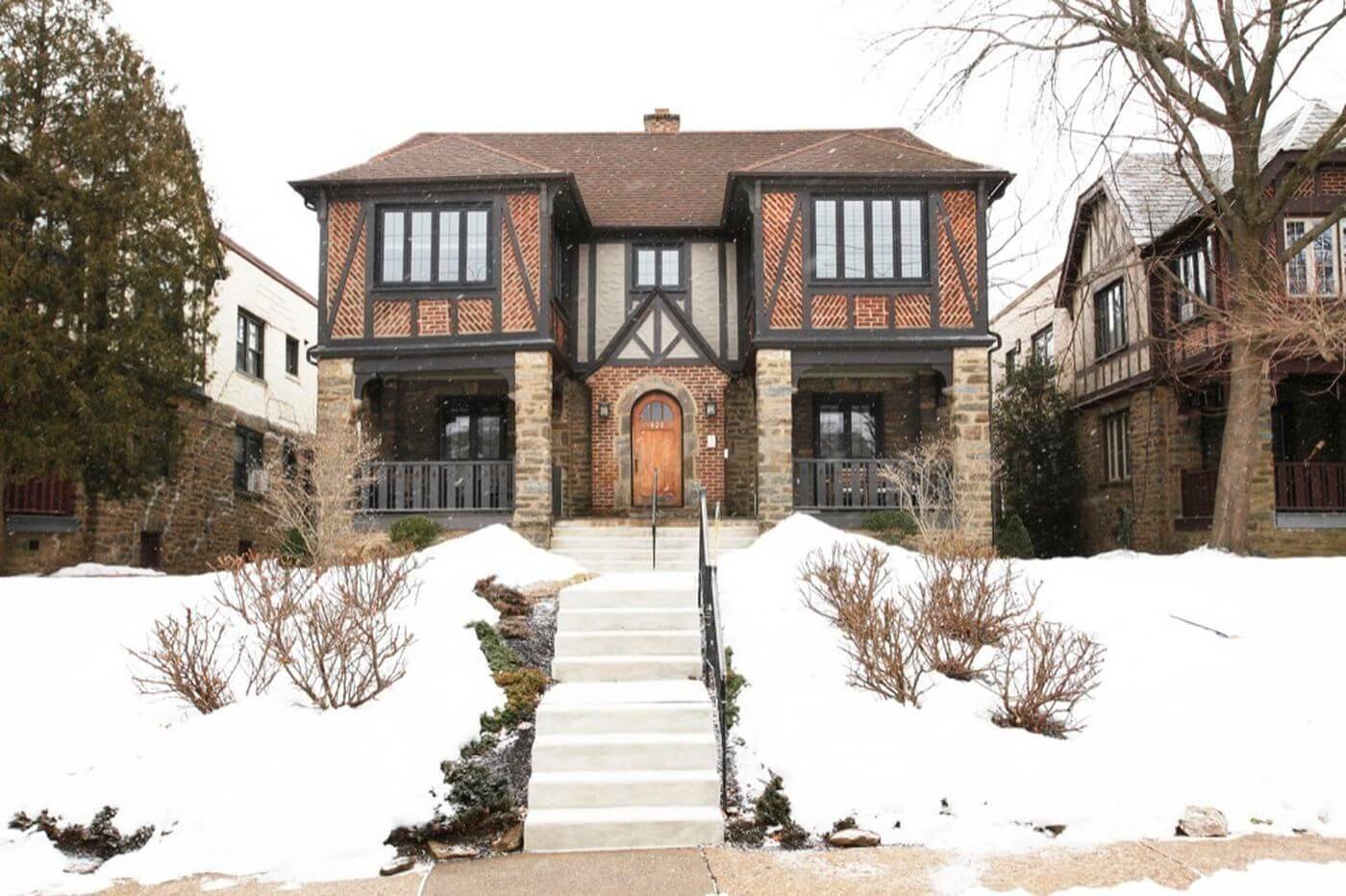 Though known as a city of rowhouses, Philadelphia does have single-family detached houses. This house, located in Mount Airy, has been divided into four condos, property records show.

This article was originally posted on Philly.com

Considered as a whole, the U.S. is facing a growing housing affordability crisis.

National housing prices are rising at twice the speed of wages and inflation, multiple estimates say. Roughly 18.5 million households spent more than half of their income on rent or mortgage payments in 2016, well above the recommended 30 percent. In some of the hottest markets — including San Francisco and Aspen, Colo. — the median home price is more than $1.3 million. And one report estimates that more than 660,000 people last year experienced homelessness — more than Bucks County’s entire population.

Meanwhile, few signs suggest that it could get better soon.

The nationwide affordability crunch has deep roots — and no simple cause or solution. Some experts have blamed the problem on sluggish wage growth. Others attribute it to the high land, labor, and material costs that are slowing new construction, especially in the starter-home market. Many municipalities have seen low-cost apartments give way to gentrification. Other experts, meanwhile, blame zoning, arguing that restricting density makes housing more expensive.

A typical block of row houses in North Philadelphia. This block, North Marston Street, is zoned to accommodate attached or detached single-family houses.

A typical block of rowhouses in North Philadelphia. This block, North Marston Street, is zoned to accommodate attached or detached single-family houses.

Municipalities have begun experimenting with solutions, including everything from tiny homes in Seattle to affordable-housing funds in Philadelphia to a Denver program that allows corporations to “buy down” rents — basically, contribute to payments — in exchange for letting the companies place employees in the units. (Chipotle Mexican Grill was reportedly interested last year, the Denver Post said.)

This month, Minneapolis took the most radical step of all: Eliminating single-family zoning.

In a 12-1 vote, Minneapolis' City Council voted on a plan that will end the city’s single-family zoning category and instead allow homes with up to three units, such as duplexes or triplexes, to be built where standalone homes have long existed. (Single-family homes can still be built.) The idea behind the action is to increase affordability by adding supply, as well as to combat the segregation that has long been associated with single-family housing.

Minneapolis is thought to be the first major city to approve such a change, the New York Times reported. (Technically, a rezoning ordinance still must be passed). Others are now considering it, too. And after a chorus of voices emerged in Philadelphia discussing Minneapolis' action, the Inquirer asked local and national experts whether the city could — or should — consider a similar proposal.

To be sure, Minneapolis and Philadelphia are very different. Philadelphia, known for its rowhouses, is far more dense, with more than 11,000 people per square mile, compared to Minneapolis' 7,000 people. Plus, the median house price in Minneapolis is $247,400, according to Zillow, significantly higher than Philadelphia’s $159,000.

Still, the stakeholders had a lot to say. Their responses have been edited for clarity and length.

Philadelphia’s biggest housing challenge is preserving the affordable housing stock we have. The recently released Housing Action Plan addresses this through a number of strategies, not simply zoning.

Philadelphia has plenty of vacant land on which housing could be built. In many cases what makes it difficult to create affordable housing is a lack of resources and costly regulations, not the underlying zoning.

That said, Philadelphia can — and does — use strategic zoning to promote affordability and equity.

Both the Housing Action Plan and the City’s Comprehensive Plan call for higher density in strong housing markets, on and near commercial corridors, and around transit locations. Council members have introduced legislation to promote this density.

Another way is to engage the private market around density. The Planning Commission recently convinced a developer to commit to make 10 percent of the units in an upcoming development affordable. By including these units in a new multifamily development, new density will help add affordability to an appreciating neighborhood.

Through upzoning, engagement with developers, and a commitment to equity, Philadelphia is working to make its zoning advance its goals.

While this zoning change is remarkable for its effects on housing, this is a more interesting story about government. Minneapolis boasts a 37-year-old mayor and a city council with astonishing diversity, including two black trans members, a poet, an artist, and several members under 50 years old.

This zoning change dramatically reduces the amount of time and money government spends on individual zoning variances and empowers homeowners to use their homes as they’d like. This zoning change is so powerful in the way it responds to the needs of its citizenry, particularly the younger, less affluent, and less-likely-to-be-white demographics that are growing.

Single-family housing boomed when white, heteronormative families dominated the country; today’s demographics are more complex and their needs are underrepresented in housing choices. This change is a bold acknowledgment of an uncharted future where we have no demographic majority but instead a lot of people who live alone and need less space, while others who want housing that can accommodate multi-generational families, and still others who crave housing that can provide income.

Could this work here? It depends on whether there is a broad enough coalition of people who feel like single-family zoning has diminished their housing prospects and limited the neighborhoods they can live in. It’s time they demand their elected officials act upon those needs — or elect a new government that will.

I applaud Minneapolis for enacting outside-the-box reform to preserve their residents’ right to live affordably near good jobs, transit, and schools. Philadelphia is different, and one size does not fit all, but we should look beyond our cities’ differences in base zoning, lot sizes, and housing stock to embrace the neighborhood-driven roots of Minneapolis' action.

Crucially, [a greater share of] lots in Minneapolis are restricted to single-family zoning, while Philadelphia has a more diverse planning code in accordance with our city’s historic urban development patterns, including diverse housing stock along neighborhood commercial corridors with green space and manufacturing. As policymakers, we must expand tax and maintenance relief to aging rowhome neighborhoods that define our city.

Despite stagnant wages and tightening banks, our minority communities still boast a 49 percent homeownership rate, among the highest of America’s largest cities. We need a toolbox of mixed-income, transit-oriented, and inclusionary strategies to keep families in quality, affordable homes across a city that suffers from a consistent 39 percent minority poverty rate and 26 percent city-wide poverty rate.

Block-by-block, we must maintain diverse homeownership and leverage markets for naturally occurring multi-family occupancy and pinpoint corridors for accessible, transit-oriented, and mixed-income development.

Anyone who’s walked through one of Philadelphia’s gentrifying neighborhoods has seen it: the 2,000-square-foot urban McMansion, complete with a roof deck, garage, and half-million-dollar price tag. We’re left wondering: Is this really the best use of our city’s space?

Our zoning code seems to think so. Nearly half of Philadelphia’s land (excluding parks) is set aside exclusively for single-family homes, mandating that certain areas of our city are off-limits to any person or family who can’t afford this type of house.

It’s as if we’ve banned the production of Honda Civics, then turned around and asked why all the new cars are Bentleys, wondering why no one makes cars for normal people anymore.

Philadelphia should follow Minneapolis' example and remap its single-family zones to allow — not require — small multifamily developments. The existing RM-1 zoning category is the perfect tool for the job.

Picture a small apartment building that stands as tall as neighboring rowhouses, or a brownstone that’s been converted into a handful of units — that’s RM-1 in action. Redesignating single family zones as RM-1 would be socially transformative without requiring radical changes to the city.

This would offer something for everyone. For those priced out of high-opportunity neighborhoods, cheaper and more plentiful housing. For those who don’t need an entire rowhouse, diverse options. For urbanists, more density in walkable, transit-rich areas. For anti-gentrification activists, a slowing of the process where priced-out yuppies move into the cheaper neighborhood nearby. And for residents concerned with neighborhood character, gentle, contextual growth.

Ending apartment bans in Philadelphia would encourage housing affordability, race and class integration, and a stronger customer base for public transit and neighborhood commercial corridors. But there’s an even more practical reason for doing so: City Council just made multifamily zoning the sole workhorse of its new affordable housing funding package.

Earlier this fall, City Council passed the package aimed at addressing the city’s deficit of below-market-rate housing. The legislation allows developers to add density and height to offset the cost of providing affordable units within their buildings. Alternatively, developers can pay into the city’s Housing Trust Fund instead of providing units on site.

City Council’s legislation, however, is available only to developers who build in areas zoned as multifamily, which represents less than a quarter of Philadelphia land. That means that most of the city’s land won’t be contributing to the Housing Trust Fund and will not see new affordable housing units constructed under the program.

As a result, there’s a strong case for minimizing or eliminating single-family zoning, as Minneapolis did, in favor of similar, zoning categories such as RM-1, which allows rowhouse-sized apartment buildings.

If Mayor Kenney and City Council want to raise more revenue for their signature affordable housing initiative, and allow more affordable housing in areas in the path of gentrification, the best way to do that is to minimize or even eliminate single-family zoning, and make 100 percent of Philadelphia eligible for Council’s new program.