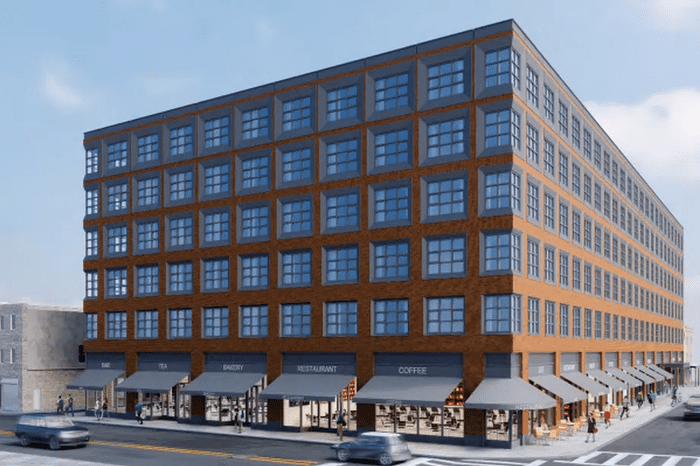 This article was originally posted on Philly.Curbed.com

A seven-story apartment building planned for the corner of Washington and 9th Street has some residents in the area concerned about congestion and the lasting effect that the development might have on the popular Italian Market.

Residents came out in droves Tuesday to voice their thoughts on the development at a Civic Design Review (CDR) meeting to go over the project.

For many, the primary concern seems to revolve around a driveway, which would lead from 9th Street, where the market is held every day, to a parking garage under the building. The garage would include 48 private and 72 public parking spaces.

It’s a relatively small, but arguably important part of the overall proposal for the development, which calls for 157 apartments across seven stories, with 15,000 square feet of retail on the first floor. It would go in at a space currently occupied by Anastasi Seafood—which would move elsewhere in the market—and an empty lot. The project is being overseen by New York-based Midwood Investment and Development.

Speakers on Tuesday wondered why the driveway couldn’t lead out to Washington Avenue instead, saying that the driveway on 9th Street could disrupt the market.

“(Developers) were sent to 9th Street by city officials but I think it’s time to send them back to Washington now,” said Andrew Stober of the Passyunk Square Civic Association. He added that, due to the direction of traffic on 9th Street, drivers would have to go past Pats and Genos, contending with congestion and foot traffic in the area to make it to the parking garage. The result is an extra half mile of driving which is neither good for drivers nor the environment, he added.

“This entrance has no place on 9th street.”

Stober echoed the feeling of a lot of South Philly residents since the new apartment proposal was first announced last month. This week, a petition posted by the urbanist political action committee, 5th Square calling for “No driveways in the Italian Market” had garnered over 400 signatures.

“This is a community that is already feeling sore about this project, which was originally proposed as 72 units,” Stober said. Regardless, at a recent community meeting an overwhelming majority of residents said they would be okay with a six or eight-story building, as long as the garage entrance was on Washington Avenue, he added.

“This is too important to the longterm future of this neighborhood,” Stober said.

Suzanne Tavani, another resident and member of the civic association, expressed support for the nature of the project.

But, like Stober, she worried about the lasting impact of the driveway, saying that it could “forever change” the pedestrian nature of the southern half of the market.

Tavani raised the concern about future developments, saying that the southern half of the market could become a series of apartment buildings with driveways off 9th Street.

“As zoning chair I don’t see.... how I could refuse a drive aisle to a future developer. Today’s decision is precedent setting.”

CDR members who spoke mostly praised the design for the building, apart from the awnings, which CDR member Ashley DiCaro said she “hated” due to the their drabness. CDR Chair Nancy Rogo-Trainer called the size of the building “perfectly appropriate” for Washington Avenue.

The CDR asked Midwood to revise the plans and return for another review next month.