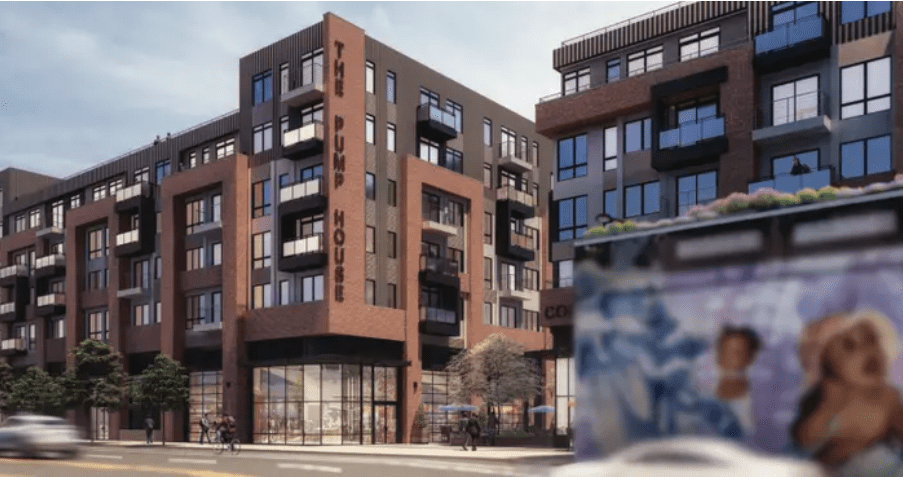 An artist's rendering shows an apartment complex planned for 2157 E. Lehigh Ave. Some in the neighborhood want the wall running alongside the development on Lehigh to be torn down.(DesignBlendz/B.S.K.M./PlanPhilly.)

The latest big housing development to come to East Lehigh Avenue in Kensington is grappling with an unusual problem.

How do you connect an apartment complex to the surrounding neighborhoods when the project site is dominated by a wall large enough to hide a Tyrannosaurus rex?

“Every single resident I’ve talked with about it [wants to see it gone],” said Amanda Fury, president of the civic group Somerset Neighbors for Better Living, in reference to the 25-foot high, 18-foot thick wall that runs along the southern edge of the property. Once rail infrastructure for Conrail, the wall’s sole practical function today is to provide a canvas for a colorful mural. It runs along 325 feet of the development, separating the project from the street.

“This is such a game-changing moment for that corner,” Fury said. “We believe everyone would benefit from the physical and mental barriers being removed.”

The property at 2157 E. Lehigh Ave., until recently home to Bruce Paul Auto parts, represents one of the most dramatic redevelopment trends in the city. Up and down Lehigh, scrap yards and junk auto lots are turning over to residential developers and now, 2157 too will soon host a four-building apartment complex dubbed The Pumphouse.

The developer behind the project, an outfit called B.S.K.M., wants to build 278 apartments across the mid-rise, brick buildings.

The plan for the lot— from junkyard to high-end apartment complex—is already ambitious. Below five-lane Lehigh Ave., new buildings are rising and population spiking after decades of decline. But on the other side of the de-facto border, communities live within the heart of the city’s opioid epidemic, where open-air drug sales and use are all-too-common features of neighborhood life.

But neighborhood activists want more. They fear the project could wind up as just another missed opportunity. What if the new homes just become another barrier, an unwelcoming, isolated island behind a wall?

“We are concerned that over the long term this wall serves as a physical and psychological barrier not only to the development, but to the Port Richmond neighborhood,” said Matt Ludwig, an officer with the Olde Richmond Community Association. “We are disappointed by the lack of communication the design team has had with the neighborhood and the lack of vision beyond the borders of the development.”

But how much can a for-profit developer really be expected to do?

B.S.K.M.’s design team argued that they have taken concerns about accessibility seriously at a Tuesday hearing before the city’s Civic Design Review committee. They plan to build a path along the side of the wall, taking a shoulder of the road currently used for parking and transforming it into an eight-foot-wide expanse for pedestrians and a five-foot expanse for bikers.

The plan also calls for expanding the sidewalk on Tulip Street, which runs under a dark and dreary overpass that dissuades all but the heartiest of pedestrians from walking north. B.S.K.M. plans to install lighting both on the wall and under the overpass to make the newly walkable areas safer.

In response to criticisms at a previous CDR meeting, the developer expanded the lobbies of the four buildings and de-emphasized parking to make them more friendly to pedestrians.

Some in the neighborhood wanted the developer to set aside space along the rear of the project for a future bike trail connecting the Delaware River Trail to the future American Avenue greenway along Lehigh. B.S.K.M. instead has proposed a staircase and elevator inside the apartment towers to allow for another trail on top of the wall. The developer has also committed to restoring the mural that covers its south-facing facade, responding to some in the neighborhood who have called for the art piece’s preservation.

But the developer won’t be addressing the community’s biggest ask: to remove the wall completely.

“The development team at this point has taken ownership of the wall and the elevated rail with no intention of removing it,” architect Chris Class of DesignBlendz said in a presentation to the Civic Design Review Board.

B.S.K.M hired a structural engineer to analyze the wall’s durability and to give an estimate of how much it would cost to remove it. After determining that they could legally tear down the wall —and the mural that covers its south-facing facade — they found that the wall is structurally sound and that razing it would cost well over $1 million.

B.S.K.M. and its lawyer, Rachael Pritzker, declined requests for comment.

Fury believes that whatever the developer decides, its impacts will extend far beyond the project site.

“Everyone recognizes that these projects represent a really big opportunity to change the neighborhood for the next several decades,” said Fury.

“A big opportunity to change the neighborhood”

The community groups still have some leverage. The Pumphouse just completed its Civic Design Review process. Now the project moves to the city’s Zoning Board of Adjustment with requests for three variances.

Public meetings are required before CDR and ZBA hearings, and with the ZBA, the support of neighborhood groups can help secure variances. The 2157 parcel is zoned for industrial commercial mixed-use, which means its needs zoning relief for any housing to be built at all.

The project will appear before the zoning board in September. It remains to be seen where the neighborhood groups will come down on it.

Fury will be there.

“I see our role as ensuring the development that comes to our neighborhood can be an asset in as many ways for as many neighbors as possible,” she said.